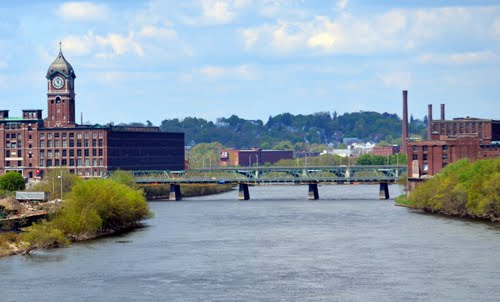 A Brief History of Lawrence

The City of Lawrence, MA was incorporated in 1845 as New England’s final and most ambitiousplanned textile-manufacturing city. Built around it the Merrimack River and the textiles mills, the City was once a thriving hub of the Industrial Revolution. Like many of the industrial hubs of the late 19th and early 20th centuries, workers flooded into Lawrence from all over the Globe looking for work and stability. From its earliest days, Lawrence became a haven for immigrants seeking solace and a better life. While workers found a home in Lawrence, the working conditions in the mills was neither conducive to family or community life and in 1912, Lawrence workers staged the Bread and Roses Strike, the first great industrial strike in the United States. As the labor movement that had found its spark in Lawrence grew in power, business owners began looking for cheaper non-unionized labor. Initially in the 1920s and later in the 1960s, manufacturing left Lawrence for less worker friendly locales. The businesses that stayed continued to search our cheaper labor. Still a city open and friendly to immigrants seeking solace and a better life, a new wave of immigrants moved into Lawrence seeking jobs in the 1970s. This second great wave of immigration brought in families from Puerto Rico and the Dominican Republic, as well as Vietnamese and Cambodian refugees fleeing years of war and oppression.

Lawrence’s economy never recovered from the flight of the textile and manufacturing industry. The new wave of immigrants found a city with less of the American Dream. However the spirit that fueled the Bread and Roses strike of 1912 remains in Lawrence and can be found in organizations like the Lawrence Prospera. Founded in 1992 by the Board of Directors of the City of Lawrence Youth Commission (LYC), its efforts are built on the mission of developing the

educational and leadership potential of inner city youth and young adults in Lawrence. The founders of Lawrecne Prospera soon recognized that youth development could not be addressed in a vacuum and that family development must play an equal role in any plan to improve the well-being of the community as a whole. As a result, a wide range of issues important to families in the City of Lawrence were examined; and programs focused on citizenship education, English as a Second Language (ESL), minority leadership and youth advocacy in the areas of higher education and career development were put into place.

Educational and Non-Profit Support Services
In September of 1995, the Parent Mobilization Project and a core group of parents applied for to open one of Massachusetts first public Charter Schools.  The application was approved and the Lawrence Family Development Charter School opened as one of the first in a group of fifteen public charter school districts in Massachusetts.  Lawrence Prospera continues to provide property and administrative support for Lawrence Family Development Charter School, creating a model that has allowed Lawrence Prospera to provide similar services to other non-profit and educational organizations in the City.  Building on Lawrence Prospera's history of providing support services, in 2014 LFD became an approved Preferred Provider/Turnaround Operator for Massachusetts school districts in need of targeted assistance. Beginning in September 2014 the first two-year contract with the Lawrence Public Schools began a demonstration project called Lawrence Family Public Academy. The Academy provides targeted assistance to LPS with teacher preparation, academic skills, language acquisition and social advancement of young children.

Quintana Center
In 1998, the Maria del Pilar Quintana Family Center opened its doors to Lawrence’s immigrant population. Helping to achieve the goals of assimilation and citizenship, the Quintana center provides Citizenship and ESL classes. In addition, the Quintana Center offers assistance with the Naturalization process, Green Card renewal, Fee Waivers, and Change of Address. Each year, the Quintana Center registers over 500 students seeking to improve their literacy skills as well as their social responsibilities and community engagement.

A strong commitment to mission, intentional planning, and a belief in the capacity of new immigrants to help build a better community led to the evolution of purposeful programs and close to twenty-two years of contribution to positive change for the people of Lawrence. These programs have prepared a strong core of Hispanic leaders and focused our efforts on building a community of learners through service and educational development.